Categories: Chronicles of the converted to Shia. 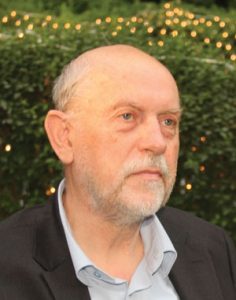 Dr. Alger had been converted to Islamic religion many years ago but he was not Shia from the beginning, and later entered the Shia religion. I asked him to tell us his story of becoming Shia. He described his story in three stages:

I was being Muslim in Oxford. Every Friday, I was going to the mosque for Friday prayer, but I must confess that from the very beginning I was not Sunni in the customary sense, but I was an Imami Sunni!

My story of becoming Shia returns to several years before the Islamic Revolution of Iran. Those years I was in Berkeley and through the martyr Chamran and other Iranian students of university, I was acquainted with Islamic struggles and Iran and inside me interest was created about it. During the revolution I went to Iran and saw the revolution with my own eyes. It was a weird passion; people were revolutionary in practice. I have never seen such scenes. I cannot describe I can only say that it was not only revolution in the administration of the country, also it was revolution in the morality and moral of the people. I Impressed by the revolution and the character of Imam Khomeini as a major Shia cleric.

The book of Imamate:

This happened until the late Mr. Seyed Mojtaba Mousavi Lari, who had been previously acquainted with me, asked me to translate his four-volume book “Basics of Belief in Islam” into English. I also translated the volumes of monotheism and righteousness, prophecy, and resurrection but about volume of Imamate, but about the volume of Imamate and the materials that was said inside the book, I was not very agree and I had criticized. That’s why I sent my questions on several times. He answered those questions well and I was convinced. After translating, I also read the contents of the book several times and eventually I changed my religion and I turned to Shia.

The interview was approaching the moments of the end. I asked him for the last time: You have lived in this Country -America- for many years. What advice do you have, if I ask you what is best for promoting Islam in the United States?

He paused and said with a bitter smile: “I think the most urgent thing is to invite Muslims to Islam!” I said with amazement: Its means …?!

He continued: Today, the work done in the name of Islam by some Muslims is far from Islam and Islamic teachings. See the situation in Syria. What does not happen in the name of Islam. It is same also in Iraq and the rest of the world. With this situation and all this murders, how can we persuade one who lives in the American society to Islam?! He said bitterness words, but unfortunately it is true. The extreme Muslims or the dried-up Salafists of the brain, in the name of defending Islam, thrown the paws on the face of Islam. With the brutal massacre of innocent Muslims in Iraq, Pakistan and Syria and daily explosions in the public passageways and the community of people, they have shown the Islam by ugly face. The slaughter of the Alawiun of Syria in the eyes of any visitor is distressing and they ask themselves whether Islam means this?! These are bitter stories that we must accept. May God have mercy upon one of the Shia scholars who said that: “The first oppressed, is Islam itself.” In the hope of elevating the word of monotheism and raising the flag of pure, peaceful Islam, all over the world and eliminating the persecution and oppression of Islam.