Sincere conversation with Sheikh Ibrahim Swada, a Japanese cleric and converted to Shia on Quranic topics:

Categories: Perspective of converted to Shiaism. 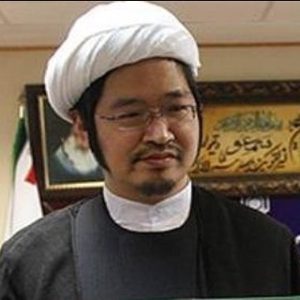 Ibrahim Swada is a Japanese 38-year-old translator, who has translated the 30th part of holy Quran. He is Shia and has been studying in the Qom Seminary for 7 years, we had conversation with him that we read together:

I have translated the 30th part of holy Quran in Japanese which lasted six months.

I was studying for seven years in the Qom Seminary and it’s about three years that I have graduated in Islamic courses and returned to Japan.

(he smiles and continue…) I am Muslim and, in order to get acquainted with the teachings of Islam, I also decided to study in the Shia Seminary according to my curiosity about Islam and on the recommendation of my father.

Considering that my father also was written the whole Quran to his method, he encouraged me to translation of the Qur’an.

The Japanese government is indifferent, which neither encourages nor prevents.

Heartly, my relationship with God has increased, On the other hand, I have turned away from God, that is, as I study and study more about Islam and Allah, I see how much I am small in the front of Allah.

Yes! one hundred percent. I can even say with certainty that I really touched the religion of Islam, and I found that Islam is one of the most logical religions.

For example: Iranian Muslim people learn religious duties and religious teachings and acquaint with Quranic translations from their elders and they do not have a problem in understanding the translation of the Quran, but in Japan, people do not have any knowledge of Islam, and for example, they do not know what the Resurrection is? And this is Incomprehensible to them, and in my opinion, these Quranic translations should be explained to them. That’s why I’m going to do the Qur’an’s interpretation to inform people and get to know Islam fully.

In 1972, after the oil crisis, the name of Islam became complex for the first time in all countries. At that time, some Japanese were curious about Islam and my father was one of the people who researched and studied about Islamic religion and thankfully, after the research, he came to the conclusion that he becomes a Muslim and he was attracted to the Holy Qur’an.I also became a Muslim following my father (in my childhood) and from that time, in the style and tradition of the Muslims, we read the Quran in the months of Ramadan.

It was in English, which was translated by a Shia person and a person from India sent it to us and reached us. Of course, it’s not a bad thing to point out that some people believe that Islam is a religion of great difficulty, and I disagree with this idea.

In my opinion, perhaps this is because they feel that Islam is different from other religions.

In Islamic religion, the execution of ordinances for the general Muslims is the same, means, ordinary people and clerics have the same duties, but in the religion of Christ and Buddha, the duties of ordinary and cleric people are separated from each other and I think that people of other countries for the same reason think that Islam is complex and difficult.

In Japan, we formed a center called Ahlul Bayt (a.s) and I perform Islamic laws and Quranic classes there and also I am working on translating Quranic verses, and even if a person wants to learn Persian, I teach Persian language.

To Be With the TruthfulInterview with Professor Hamed Alger