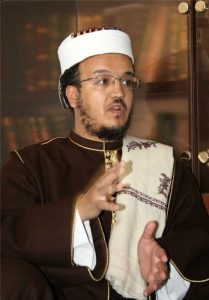 Dr. Essam Al-Emaad is converted from Yemen (born 1968 AD). His father Ali Yahya Al-Emaad and his uncle, Abdul Rahman Al-Emaad, are among the greatest Salafi and Wahhabi scholars in Yemen. In addition to his father, uncle and cousins, his two sisters, Dr. Bushra, and Dr. Hoda Al-Emaad are among the famous teachers of the Wahhabi universities in Yemen.

Essam then traveled to Saudi Arabia to continue study and graduated in PhD. from the Faculty of usul al-din” اصول الدین”- University of “Imam Mohammad ibn Abdul Wahhab” in the field of Hadith Sciences.

During his studies in Saudi Arabia, he participated to the circle of lessons and the private circle of the Grand mufti(مفتی) of Wahhabism “Sheikh Ibn-e-Baz” and become one of the prominent, elite and promising students. After graduation, he took four years as Imam jama’t (امام جماعت) in different mosques i.e. “Baab al-Qa’a, Al-Usta, Hail Saeed and Al-Dawa” and at this time he Taught the main Wahhabism books including the book of “al-Tawhid Muhammad ibn Abdul Wahhab” in these mosques and schools, especially in masjid Jamie (مسجد جامع).

At the same time, he was influenced by the ideas of Salafi ibn Taymiyah (eighth century) in the famous book “Manhaj al-Sunnah” and wrote anti-Shiite book “الصله بين الاثني عشريه و فرق الغلاه – Shiite correlation and exaggeration sects” in two parts: The first part deals with the Taunt of Imam Ali (AS) and the second part against the general Shiites. However, Fortunately, Dr. Essam, prior to the publication of this book, converted to Shia religion, and never published the book. At the beginning of the conversation, with much regret and sadness for writing this book explain that: I came to friendship with Imam Ali (a.s) from the path of hostility with Imam Ali (a.s). In an interview, he considered the Innocence and Rightfulness of Hazrat Zahra (PBUH) as the main factor to his conversion and said «It is very difficult for Wahhabis to accept that Hazrat Zahra (PBUH) is the truth and right, and by accepting this truth, they questioning themselves. Referring to the usurpation of Fadak (غصب فدک), Essam Al-Emaad added: When one of the Companions came to the Prophet (peace be upon him) and said, “I have endowed all my belongings.” The Prophet (s.a.w.w) was upset and said that you have the right to forgive one-third of your property, how can the Prophet (s.a.w.w) be told that after me whole of my belongings are Charity. Based on the vote of all wise men, if someone wants to charity belongs, the first people who realize, are their children, not friends and fellows who are not inherited, unless the father feels that the children are daffy (daffy means who cannot hold the land and property), although the Prophet (s.a.w.w) himself is a wise man (more than anyone), I thought maybe his daughter Zahra (s.a) would be a daffy, I studied and found that Prophet Muhammad (s.a.w.w) described the his daughter hazrat-e- Zahra (s.a) as the most perfect woman in the world, so how could he not say to his family. I began to wonder by reading these phrases in the book of “Fakhro din Razi”, The hazrat-e-Zahra’s innocence (s.a) is one of the most important factors in tendency to Shia and I raised this in an article titled “The innocence role of hazrat-e-Zahra (s.a) in Estebsar (نقش مظلومیت حضرت زهرا سلام الله علیها در استبصار)”. At the end of the interview, he said: It is very difficult for Wahhabis to accept that Hazrat Zahra (PBUH) is the truth and right, and by accepting this truth, they questioning themselves and because of this, I found out the best way to explain and confirm the innocence, is to explain the story of Hazrat-e- Zahra (s.a) and her uprising against those two people and her extreme innocence against them.»

Dr. Essam is an expert in the sciences of Hadith، Rijal, history of Islam and Islamic sects، and distinguished expert in contemporary Islamic movements and fond of characters like Syed Muhammad Qotb and Muhammad Qazali (A contemporary scholars and Scientific critics of Wahhabism” that Essam has interpreted them as Bedouin thought «العقل الصحراوي»”). After conversion, he succeeded in guiding hundreds, but thousands of young seekers of truth, to the school of Ahlul-Bayt (a.s) including his brother, nephew and his three sisters (Who are currently studying religious sciences in Qom), by writing helpful argumentative books and critique from within the most fundamental ideas of Takfiri Wahhabism and by holding a series of debates (via satellite, face to face, and written) with the leaders of the schools of caliphs, especially the Wahhabis.

One of his most important debates is with Kuwait’s Wahhabi leader “Osman al-Khamis”, one of the most prominent Wahhabi scholars which took place over the duration of a year via satellite and then published in 869-page, one-volume called “Al-Zilzal- الزلزال “. Following these debates, which were welcomed by the very young people of the Arab world, some of the reports from Arab countries stated the following: (Failure of Sheikh Wahhabism in Kuwait” روزنامه: صوت آل البيت در مصر، شماره: 27”). This book can be an efficient and up-to-date source for researchers. Other works include the book “Sheikh Muhammad ibn Abdul Wahhab’s critique from within- نقد الشيخ محمد ابن عبدالوهاب من الداخل” and also the book “المنهج الجديد و الصحيح في الحوار مع الوهابيين” which author attempts to answer this question that, how can the Shiite religion be presented to Wahhabis? This article was translated into Farsi by Mostafa Eskandari and published in the form of “An insulting conversation; A step towards understanding ” in 144 pages by Darul-ghadir Publications. The author in the “An insulting conversation” introduce a new way of discussing with the Wahhabis in order to convert them to Shia. By considering his deep knowledge of Wahhabism, notes the three pyramid stages about Ahlul-Bayt to Shiite supply to Wahhabis. First step: Understanding the dependence and bondage of Imāmīa school (here examines two main Wahhabi misconceptions about similarity of Shi’a imagining and Qolah “غلاه”), second step: Scrupulously recognition of Imāmīa school (In this step four important facts are analyzed: Divinity and Prophecy, Sharia’t, purposes and Imāmīa terms.), and third step: fundamental recognition of Imāmīa school (There are four main points to be considered: Sources, Imamate, Identity and Truth of Imāmīa and The reasons for its Genesis). I propose to study this right and at the same time complete work specially to young groups.