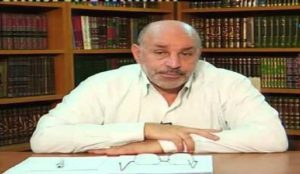 The author, journalist and Egyptian activist are among the most famous contemporary writers. He was born in Cairo in the capital of Egypt in 1952 in the Shafi’i family (religion). Worked in the field of journalism and press in Egypt. He is the author of many publications and many published articles in Egyptian and non-Egyptian newspapers and the founders of “دار الهدف الاعلام” and “النشر قاهره” of Cairo.

Salih grew up and raised in the Islamic space of Egypt. This period coincided with Islamic movements in the 70’s decade as Sunni thought and he contacted these currents. He was a reviewer not giving up by their thoughts. Therefore because of the inconsistencies in these currents, he was thinking of an alternative to them.

The Context of Intellectual Evolution:

The end of the 70’s decade (1977 AD) was a journey to Iraq. There, he went to the house of one of his friends that was cultured, scholar and Shiite. He also visited the holy shrines in Bagdad and Shiite mosque and listened to lessons and lectures and talks with the Shia youth. As a result, a lots of illusion and Imagination about Shia that was not correct, solved.

He then went to Kuwait and met some Shiite youth and studied some of books i.e. kitab al-Saqifa, kitab Aqaed al-Imamiya and Al-muraje’at. By his search and effort, he realized that bad pattern has come after Prophet (s.a.w.w), from that pattern, all the thoughts that made the truth of Islam erroneous became evident, also forged texts and with his words and narratives covered the truths. Then he shared himself in Consolidation of void and weak and Loosing the right. Also invented various ways to mislead people from God’s way.

When the discovery on right pattern ends, the false pattern will be cleared up in front of us and the sentence about it, is compared to the Scripts, not the rejal(رجال). Therefore, several questions came to his mind that the first of these questions was about the nature of the right after the prophet (s.a.w.w).

Causes of Tendency to Shia:

According to the Al-Werdani, Shia based on the Imamate theorem is Shiite heritage which is distinct from the Sunni heritage. It also created many ideas and views which is reflected in jurisprudence and theology.

The place that the Sunnis have placed for Imam Ali (a.s) is a surprise to Al-Werdani. The fact that Uthman had precedence over Imam Ali despite the works and vices that he had done. Equality of Imam Ali (a.s) with Mu’awiya and assign small and big sins to Imam (a.s) was other factors that he was surprised.

The issue of “Fat’h Ba’b ijtihad” (فتح باب اجتهاد), which has always been around for many centuries from the other side(Sunnis), attracted his attention in the Shia plan. For example, the Shiite religious institution (Unlike Sunni which make mistakes on some issues such as bank and Usury.), in the field of ijtihad, they have been very different from the Sunni.