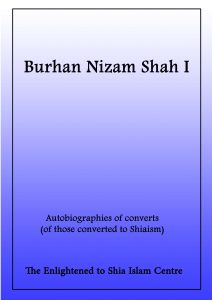 Burhan Nizam Shah I, was ruler of the Ahmednagar Sultanate, in Central India. He ascended the throne on the death of his father Ahmad Nizam Shah I in 1508[1] or 1510 when he was seven years old.[2] He died in 1553 and was succeeded by Hussain Nizam Shah I.

He converted to Shia Islam and royals and commoners followed suit. Sunni theologians and their followers resented this but were crushed. His reign was characterized by religious tolerance, art and flourishing trade. Skirmishes with the Mughals, Bijapur & various other small states continued through his reign. A palace built for Burhan Shah, the second Nizam, stands in ruins two miles south-east of the city of Ahmednagar.