In A Quatrain Of Imam Khomeini By “Dr. G. Legenhausen” 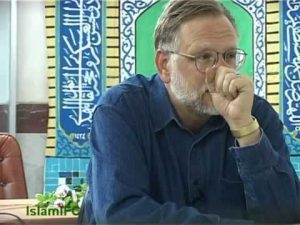 It is two years now since the father of the Islamic Revolution of Iran was liberated by Allah from the turmoil and darkness of this world. One of gifts which he left upon his departure to the next world is his poetry. This poetry was written for and at the request of his beloved daughter-in-law, Fatimah Tabatabai. She, in turn, has graciously given some of the treasures which were written for her to the devotees of Imam through the publication of some of these works. The first volume of Imam’s poetry which appeared was entitled “Badeh ‘Ishq” (The Wine of Love).

This volume was in preparation during the lifetime of imam, since the calligrapher notes that he was copying some of the poetry just hours before the Imam passed away. For those who are acquainted only with the political writings and speeches of Imam, the poetry may come as a surprise. Indeed, Imam’s poetry came as a surprise even too many of those who were close to him; how much more surprising it must seem to those in the West who only had distorted glimpses of his personality.

The poetry displays tenderness, a playful sense of humor, great familiarities with classical Persian poetry, particularly that of Hafez, humility and an appreciation of his own failings, and a deep mystical longing for union with Supreme Reality. In some of the poetry, Imam teases his daughter-in-law. It is to her credit the she has shared this poetry with the Muslims, despite its very personal quality.

For example, in one of his quatrains, Imam addresses his daughter-in-law, whom he calls by the nick-name Faati. He writes that although she studies philosophy, she really doesn’t know very much about the subject. In fact, Fatimah Tabataba’i is remembered by some of her teachers as having been a very good student of philosophy. In Arabic and Persian the word for philosophy is falsafeh, which is spelled with the letters, fa, lam, sin, fa, heh. So, Imam begins his quatrain:

Fati, who studies the branches of philosophy,

Now the letters faa, lam, sin, by themselves spell the word “fals” which is a small coin. The ward “fals” also has the connotation of bankruptcy or being poor. So, when Imam writes that faati knows only the first three letters of ‘falsafeh’, he puns on the similar spelling of ‘falsafeh’ and ‘fals’. It is a joke, in which he teases his daughter-in-law by telling her that she doesn’t really know that much at all about her chosen course of study. In the same teasing tone, he finishes the quatrain by advising her to give up philosophy:

My hope is that with the light of God

She may unveil herself of philosophy!

This is more than a joke, for it reveals Imam’s own recognition of the limitations of merely theoretical knowledge. Philosophy can act as a curtain or a veil which blocks one’s vision of God. The metaphor indicates that it is possible for one to become so engrossed in the pursuit of theoretical knowledge, that one may fail in practice to realize one’s proper relation to Allah.

There is a familiar division in the Islamic tradition between the exoteric and the esoteric, the outer and inner, zaher and batin. In every way, Imam’s poetry represents the vitality of his esoteric life. The exoteric dimensions of Islamic spirituality is most widely known in the Wet as it has been presented by various Sufi group, many of which have strayed from the life-giving source from which they sprang.

However, the tradition of Islamic gnosis is a wide river containing many more currents than one might expect to find by reading popular expositions of Sufi thought. Particularly in Shi’ite Islam, gnostic mysticism has played an important role. The most important Muslim philosopher since Ibn Sina, was Sadr al-Din Shirazi, known as Mulla Sadra. No one has matched his influence in the three and a half centuries since his death. Many of the themes central to Mulla Sadra’s philosophy are drawn from the Sufi theoretician, Ibn al-Arabi. Imam Khomeini studied and taught the philosophy of Mulla Sadra.

However, in his poetry, Imam displays a recognition that theoretical knowledge of gnosticm, ‘irfan, is not what really matters in life. It can even be a trap by which one becomes distracted from one’s practical duties. In a letter written to Fatima Tabataba’i, lmam explained how a seeker of Truth may be diverted from his goal by attending exclusively to pedantic pursuit of the humanities, irfan and philosophical truth.

Imam admits that he himself suffered from this distraction in his youth. He writes, “The weighty tomes of the ‘Four Journeys’ diverted me from my journey to the Friend”. ‘The Four Journeys’ (Asfar al-Arba’a) is the name of the Magnum Opus of Mulla Sadra. He also mentions that he became similarly sidetracked during his study of the works of Ibn Al-Arabi. Imam does not mean to advise that these books should not be studied. In his famous letter to Gorbachov he recommends the works of Ibn Al Arabi. However, reading the classics is not enough. What is required is expressed by Imam Khomeini in the language of Hafez, the language of love:

Roll up the scroll of the Sciences and philosophy;

Cast a glance upon me, O Beloved, that my path may be toward you

I WAS A SUNNI WHO BECAME SHIA, AND MY FAMILY HAVE TURNED THEIR BACK ON ME. WHAT TO DO?Nigerian Princess Converted to Shia Islam Arrives at Imam Hussein Holy Shrine