Mr. Jafar Siddiq and Mrs. Hosni Letang, an Indonesian couple, talk about their conversion to Shia 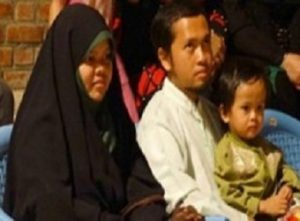 Please introduce yourself and tell why you became a Shia?

I am Jafar Sediq, 31 years old, with a bachelor’s degree in jurisprudence and education. I have been coming to Iran since 1986. My father became the cause of my inclination towards Shia. My father read Imam Khomeini’s book Asrar al-Salah, which was translated into Indonesian, and this book made my father, then my mother, and my sister become Shiites. I was 14 years old at that time. My father said that you should know the Ahl al-Bayt (AS) and for this purpose, I participated and passed the exam that was held in Indonesia to enter the school of religious sciences in Iran.

Why did you choose Qom?

Mrs. Hosni Letang: I was in Indonesia for sixteen years, after learning about Shia, I had disagreements with my mother, relatives and neighbors, because my mother was against my hijab, she believed that if I wanted to continue my education and then do social activities My hijab will hinder my progress, so I have to choose either my hijab or continuing my education. I preferred to choose a way to have both together. A year before university, my mother only paid for my education and I didn’t even have money to buy a scarf, so I used to buy old and second-hand scarves from my friends and wear them. After I turned 17, I decided to take advantage of free education in Iran, because I had heard that an exam would be held and if I passed, I could continue my education in Iran.

What is the difference for you when you did not wear a hijab and now that you wear a hijab?

Mrs. Hosni Letang: Unfortunately, before I became a Shia, I was not a veiled girl and I behaved like Westerners. At the age of 16, I came to the conclusion that this freedom would become a prison for me, and thank God, I distanced myself from it. A year before entering Iran, I became a Shia, because the conditions in Indonesia were very difficult to maintain the hijab, and I came to Iran to maintain the hijab and preserve my beliefs.

What was interesting about Shia religion for you?

Talk about the blessings that Hazrat Masoumeh (pbuh) had for you?

Jafar Sediq: It was because of her blessing that I passed the exam to continue my studies. At first, I did not know Farsi, but thanks to the grace of God and the attention of Hazrat Masoumeh, I was able to come to Iran and received a scholarship with free facilities.

As a Shia woman, what do you expect from mothers?

Mrs. Hosni Letang: I was not a veiled girl before becoming a Muslim. Therefore, I advise Iranian mothers to teach their daughters about religious issues and to be appreciative of this great blessing, which is the Islamic government in the country.