The participation of thousands of converts all over the world in the great march and walking of Arbaeen-e-Hosseini: 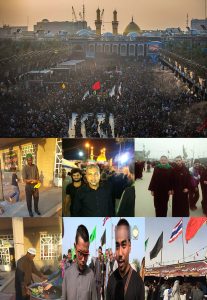 Like years ago, a crowd of people in love, walked toward the Kaaba of Azadegan, where that with the God blesses, the most honorable point of the earth is dedicated to it.

Every year, this population is growing and not stopped, Shiites each year on this day to renew allegiance to the Imam of Zaman (A.T.F.S).

The Arba’een Pilgrimage is the world’s largest annual public gathering that is held every year in Karbala, Iraq at the end of the 40-day mourning period following Ashura, the religious ritual for the commemoration of martyrdom of the grandson of Prophet Mohammad and the third Shia Imam, Hossein ibn Ali’s (a.s) in 680. Anticipating Arba’een, or the fortieth day of the martyrdom, the pilgrims make their journey to Karbala on foot, where Hossein (a.s) and his companions were martyred and beheaded by the army of Yazid I in the Battle of Karbala.

The number of participants in the annual pilgrimage reached 30 million or more by 2016. On the routes of the pilgrimage, food, accommodation and other services are provided for free by volunteers. Hossain (a.s) is believed to transcend all cultural boundaries and be a symbol of universal freedom and compassion.

Some of the pilgrims make their journey from cities as far as Basra, about 500 kilometers (310 mi) away by road. The ritual has been described as “an overwhelmingly powerful display of Shia belief and solidarity”

This millionth population is not even specific to Shias, and many other religions also participate.

Part of this population is also the specified by converts. Those who, by the blessing of Seyyed al-Shohada (as) and Ahlul Bait (a.s), have found the right way.

The above illustrations are the participatin of converts at the Arbaeen-e-Hosseini Walking Ceremony.

The religion of Islam, as a complete religion, orders all human beings to study and investigate.German Economist converts to Shia Islam at Imam Reza Shrine