Arbaeen walk, historic event in the Islamic community and its Significance 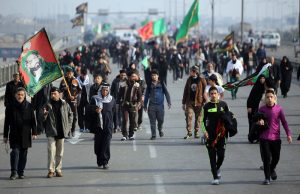 Especially in recent years, the Arbaeen Walk has turned into a magnificent phenomenon. But due to certain reasons, it has not received the attention it deserves from the international mainstream media. In the following article, has introduced and shed some light on some of the dimensions of this historic event in the Islamic community and even the world.

Arbaeen is an Arabic word and it means “the fortieth.” In Shia culture, this word refers to the fortieth day of the martyrdom of Imam Hussain (a.s.). Imam Hussain (a.s.) was martyred in Karbala on the tenth day of Muharram (the first month in the Hijri lunar calendar), which is known as the Day of Ashura, and according to historical accounts, on the fortieth day after his martyrdom at 20th of Safar (the second month in the Hijri lunar calendar), the survivors of the Ashura event, namely the children, wives and other relatives of the martyrs of Ashura, returned to Karbala and made pilgrimage to the tombs of Imam Hussain (a.s.) and other martyrs of Karbala.

The Iraqi Shia mostly went on this pilgrimage on foot, but at some point, in history, this tradition was abandoned. About a hundred years ago, this tradition was revived in Iraq, but during Saddam Hussein’s rule in Iraq (1979-2003), the Arbaeen Walk was banned and people who were going to Karbala on foot sometimes faced violent reactions. According to some reports, Saddam’s government used to cut off the legs of those walking towards Karbala. However, the Shia, in spite of the government’s pressures, secretly maintained this tradition by moving through palm-groves and during nights.

After the fall of Saddam, the Iraqi Shia started making pilgrimage freely on foot from all over the country to Karbala. They plan their walk so that they reach Karbala on the Arbaeen day or the days close to it.

In the days before Arbaeen, all the ways leading to Karbala are full of pilgrims moving towards this city. According to statistics from previous years, about 20 million people attend this event every year.

The majority of Iraqi Shia are based in southern regions of Iraq. The first group of walking pilgrims in Iraq are the Shia of the Al-Faw area, 667 km from Karbala

in southern Iraq, who begin their movement on the 24th of Muharram, 26 days before Arbaeen. They pass through different cities to reach Karbala. Residents of the cities on route also join the movement and go to Karbala mainly through the city of Hillah.

Most pilgrims who travel to Iraq from other countries to attend the Arbaeen Pilgrimage start their walk from the city of Najaf, the burial place of Imam Ali (a.s.) the first Imam of the Shia. The distance from Najaf to Karbala is about 80 km, so pilgrims who want to be in Karbala on the Arbaeen day, should better start their journey from the 16th of Safar.

Along the Walking paths, there are places for the pilgrims to have meals and rest; these rest-stops are known as “Mowkeb”. These Mowkebs are mainly organized by Iraqis citizens and are fully managed by them, and the Iraqi government has almost no role in organizing them, and its main role is to provide and maintain their security.

Besides being religiously valuable, this Walk serves several purposes:

In the Arbaeen Walk, each of the participants has his/her solitude with God and a special spiritual experience; But this collective movement and observing all kinds of devotional and spiritual behaviors from others such as reciting prayers, mourning, benevolence, tolerating all kinds of difficulties such as heat and thirst and blisters on the feet deepen spirituality.