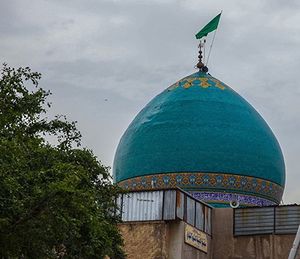 At the beginning of his deputyship, he had a good and respectable status in the Abbasid court. However, he faced some troubles later and was forced to live in hiding and was imprisoned for five years. One of the most important incidents during the life of al-Husayn b. Ruh is the case of al-Shalmaghani who was a trusted agent of him, however, al-Shalmaghani held deviant ideas later which led to a handwriting issued by Imam al-Mahdi (a.s) cursing him.

Al-Husayn b. Ruh’s scholarly position has been considered to be outstanding due to his jurisprudential books and his complete expertise in scientific debates. He was the special deputy of Imam (a.s) for twenty-one years (305/918 – 326/938).

It is not known when he was born. His teknonym is Abu l-Qasim, and his epithet has been mentioned in sources as al-Nawbakhti, al-Ruhi, and al-Qummi. Speaking with Farsi dialect the of city of Abih (next to Saveh) and his close relation with the people of this city have been mentioned as the reasons why some believe he was from Qom. However, he is famous as al-Nawbakhti in most sources. It is said that he was affiliated to al-Nawbakhti Family from his mother’s side. Some have said he was from al-Nawbakhti branch in Qom who migrated to Baghdad in the time of the first deputy (‘Uthman b. Sa’id).

Al-Husayn b. Ruh was among the wisest people of his time and knew all about the circumstances of his time. In interactions with opposers of Shi’a, he practiced taqiyya (precautionary dissimulation) so much that he dismissed one of his servants because of cursing Mu’awiya.

From some reports, it can be learned that the position of al-Husayn b. Ruh, was known among Shi’a, despite the first and second deputies, so that some Shi’a decided to disregard their regional agents and directly contact the third deputy.

With the cooperation of ten proxies in Baghdad and other agents in other Islamic regions, al-Husayn b. Ruh began his activities as the deputy of Imam (a.s). The names of some of his agents and proxies are as follows:

Position in the Abbasid Court

During the life of Muhammad b. ‘Uthman, al-Husayn b. Ruh al-Nawbakhti had a great influence on Abbasid court and received financial aids from officials. After receiving the position of deputyship at the time of al-Muqtadir, he had a good influence on Abbasid government and was respected by them. It was because of the influence of al-Nawbakhti family and also the ministry of Abu l-Hasan ‘Ali b. Muhammad of Al Furat family who were supporters of Shi’a. According to Umm Kulthum, daughter of Muhammad b. ‘Uthman, during the mentioned period, al-Husayn b. Ruh received some properties from Al Furat family. Another reason for the position of al-Husayn b. Ruh in the court was his cautious stances; as he tried to keep himself away from the troubles of that period such as that of Qaramata’s.

However, after Hamid b. al-‘Abbas became the minister who supported opposers of Shi’a, al-Husayn b. Ruh faced some troubles.

Some sources have reported that after al-Husayn b. Ruh was appointed as a deputy of Imam al-Mahdi (a.s), he had to go into hiding. The exact time and period are not known; however, it was possibly from 306/918-19 to 311/923-24 when Hamid b. al-‘Abbas was vizier. During this time, according to al-Shaykh al-Tusi, al-Shalmaghani was put in contact with the people. There is not much information about this period.

Al-Husayn b. Ruh al-Nawbakhti was in prison of al-Muqtadir from 312/924-25 to 317/929. In Shi’a sources, no reason is mentioned for the imprisonment of al-Husayn b. Ruh, but Sunni sources mentioned two reasons:

Some contemporary researchers mentioned that the reason for his imprisonment was his fame in deputyship, association with Shi’a, his fame in organizing their affairs and collecting their letters and delivering them to Imam al-Mahdi (a.s). After he was released from the prison, they could not make trouble for him due to the presence of famous people from al-Nawbakhti family in important positions of the government.

Al-Husayn b. Ruh wrote a book in jurisprudence titled as al-Ta’dib and sent it to hadith experts in Qom for evaluation and asked the scholars to mention if there were any points against their views. After evaluation of the book’s content, scholars of Qom approved all of it except one point and sent it back to him.

During his deputyship, he also had debates which are mentioned in details in hadith sources. The answers al-Husayn b. Ruh gave to question in these debates show his competence in religious issues and his scientific position.

In some sources, some wonders are attributed to al-Husayn b. Ruh. Sometimes, he revealed some signs to prove himself and remove the doubts of the opposers. The letter of ‘Ali b. Babawayh (father of al-Shaykh al-Saduq) to him for having children and asking for the supplication of Imam al-Mahdi (a.s), another letter from Ibn Babawayh for deciding about going to hajj, giving the news about the demise of Ahmad b. Ishaq al-Qummi and giving the news to Muhammad b. al-Hasan al-Sayrafi about the missed gold bar are some examples of his wonders.

Abu l-Qasim al-Husayn b. Ruh al-Nawbakhti passed away on Sha’ban 18, 326/June 25, 938. The tomb of this great figure is in the region of Nawbakhtiyya in the ‘Attaran market (region of Shurja in Baghdad) which is now being visited by the Shiite.