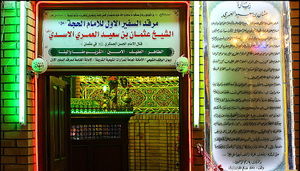 The Four Deputies or Al-Nuwwāb al-Arbaʿa (Arabic: النُواب الأربَعَة), were four representatives or special deputies of Imam al-Mahdi (a.s) during the Age of Minor Occultation and provided the means of communication between Shi’a and Imam (a.s): Uthman b. Sa’id, Muhammad b. Uthman, Husayn b. Ruh and Ali b. Muhammad al-Samuri.

The Four Deputies were among very known and trustworthy companions of Imams (a.s) who were introduced one after another by Imam al-Mahdi (a.s), each through his previous deputy. The Four carried out deputyship of Imam (a.s) for seventy years and delivered the messages and requests of Shi’as to Imam (a.s) and Imam’s (a.s) answers to them to farthest places in the Islamic world through their agents. It was also among their duties to remove doubts about Imam al-Mahdi (a.s) and to hide the place of his living and apparent characteristics of Imam (a.s).

The activity of special deputies of Imam al-Mahdi (a.s) lasted from 260 AH until 329 AH (about seventy years) which was the Age of Minor Occultation. In these years, four of Shi’a, some of whom were distinguished people and companions of tenth and eleventh Imams (a.s) were appointed as the deputies and representatives of Imam al-Mahdi (a.s) and the links between Imam (a.s) and Shi’a. In these years, there were other agents in Islamic regions and cities who were representatives of the four deputies.

‘Uthman b. Sa’id mostly stayed in Samarra. After the demise of Imam al-Hasan al-‘Askari (a.s), he abandoned the city and moved to Baghdad. At that time, Samarra was the center of the Abbasid army. The Abbasids were not friendly with Shiite Imams (a.s) from the very beginning. Some people believe that this was the reason why ‘Uthman b. Sa’id moved to Baghdad. He turned the Karkh district (the Shiite residence) into a center of leadership for the Imamiyya.

The name of ‘Uthman is mentioned in rijal references as ‘Uthman b. Sa’id; but, in rijal al-Kashshi, he is mentioned as Hafs b. ‘Amr which might be his nickname in his hidden meetings with other agents. In all books, his teknonym is mentioned as Abu ‘Amr due to his attribution to his great grandfather; but, in Bihar al-anwar and Safinat al-bihar, he is also mentioned as Abu Muhammad, because he had a son, called Muhammad.

His most important title was al-‘Amri and it is said that he was called so due to two reasons, one was that Imam al-‘Askari (a.s) did not allow the name of the Third Caliph (‘Uthman) and his title (Abu ‘Amr) to be gathered in him and since then they called him al-‘Amri. Another reason was that he was attributed to his paternal grandfather, “‘Amr”, and was called al-‘Amri. Muhaddith Qummi considered his title as al-‘Amri because of the attribution of his mother to ‘Umar b. Atraf al-A’la.

The title of ‘Uthman is mentioned as al-Samman and al-Zayyat. Also, because of his attribution to Banu Asad tribe, he was called al-Asadi. He was also called al-‘Askari because of living in ‘Askar neighborhood in Samarra.

It is mentioned that he had two sons:

The same as the date of his birth, the date of al-‘Amri’s demise is not known; but there are two reports about it:

He was buried in the western Baghdad in the Darb Mosque. According to al-Shaykh al-Tusi in his book, Kitab al-ghayba, he visited his grave there from 408/1017 to 430/1038.

Nowadays his burial place is in the Rassafa area east of Baghdad in a place known as Shurja Bazaar.

According to rijal sources, ‘Uthman b. Sa’id was the agent of three Infallible Imams (a.s), (Imam al-Hadi (a.s), Imam al-‘Askari (a.s) and Imam al-Mahdi (a.s)). However, some other texts also considered him a servant of Imam al-Jawad (a.s) at the age of eleven and mentioned that he was trusted by Imam (a.s) and given some important missions. Some Shi’a scholars did not accept this report and considered it unacceptable that he could be among the companions of Imam al-Jawad (a.s) because of ‘Uthman’s age and considered this report among the mistakes of great scholars of rijal.

In addition to Imam al-Hadi (a.s), ‘Uthman was trusted by Imam Hasan al-‘Askari (a.s). In his Rijal, al-Shaykh al-Tusi introduced ‘Uthman b. Sa’id as the deputy of Imam al-‘Askari (a.s). In different reports, it is mentioned that Imam al-‘Askari (a.s) addressed ‘Uthman and considered him his deputy; or elsewhere, he took others witness that ‘Uthman was his deputy. Imam (a.s) introduced him as the head of agents; meaning that all religious taxes Shi’a sent through agents were delivered to ‘Uthman and he delivered them to Imam (a.s).

After the martyrdom of Imam al-‘Askari (a.s), ‘Uthman b. Sa’id managed the burial of Imam (a.s). According to Imamiyya, these signs showed that he was a representative of Imam al-Mahdi (a.s).

Because of the pressures of the official agents in Samarra and the existence of many enemies, ‘Uthman b, Sa’id moved to Baghdad by the order of Imam al-Mahdi (a.s). According to Jasim Husayn in The Occultation of the Twelfth Imam, A Historical Background, although Samarra was the capital, because of the existence of Abbasid armies who were always against Imams (a.s) and ‘Uthman wanted to manage the Wikala network away from their surveillance, he went to Baghdad and made Karkh neighborhood the place for organizing the Imamiyya.

During the period of his deputation, ‘Uthman led the agents of different regions. He received trusts, religious taxes and gifts of people and sent them to Imam (a.s). He also delivered Shi’a’ letters to Imam (a.s) and returned his messages and letters to Shi’as. When Ja’far, brother of Imam al-‘Askari (a.s) claimed deputation, Ahmad b. Ishaq, a companion of Imam Hasan al-‘Askari (a.s) wrote a letter and sent to Imam al-Mahdi (a.s) through ‘Uthman b. Sa’id to find the truth about Ja’far’s claim. Imam (a.s) answered the letter and rejected Ja’far’s claim and called him a mischief-maker who abandoned the prayer.

He traded oil and olive as a cover for his actual activity; because, he hid his responsibilities of Imam’s (a.s) deputation to be protected from the harms of the government. ‘Uthman put the properties and letters of Shi’a in oil containers and took them to Imam (a.s) so that no one knows about their content. Thus, he was also called Samman and Zayyat, literally, the seller of oil and olive.

During the special deputation of ‘Uthman b. Sa’id, three of the famous agents, Ahmad b. Ishaq, Muhammad al-Qattan and Hajiz b. Yazid Washsha’ were considered among the assistants of ‘Uthman and managed the communication and supervision of agents of other places including the agents in Kufa.

In Bihar al-anwar, al-‘Allama al-Majlisi mentioned a ziyarah Text for ‘Uthman b. Sa’id and said that he saw it in an old script from a Shi’a scholar. Al-Majlisi did not mention the name of the book or author.

Most hadiths regarding the Four Deputies are cited in al-Shaykh al-Tusi’s Kitab al-ghayba. His sources were two books that are not available today: Kitab fi akhbar Abi ‘Amar wa Abi Ja’far al-‘Amriyayn written by Ibn Barina al-Katib, the son of the second deputy’s grandson, and Akhbar al-wukala’ al-arba’a written by Ahmad b. Nuh.