Prayer and its rules Part 2 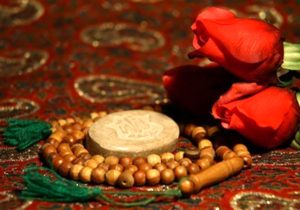 Time for Maghrib and Isha prayers

– The obligatory precaution is that as long as the redness in the eastern sky appearing after sunset has not passed overhead, Maghrib Prayer should not be performed.

– In normal circumstances, the prescribed time for Maghrib and Isha prayers is till midnight. But if forgetfulness, oversleeping or being in Hayz and similar unusual situations prevent one from performing the prayers till midnight, then for them the time will continue till Fajr sets in.

In all the cases, Maghrib must be prayed before Isha, and if one contradicts their sequence purposely or knowingly, the Prayer will be void. However, if the time left over is just enough for Isha prayers to be offered within time, then Isha will precede Maghrib prayers.

– If a person offers Isha prayers before Maghrib prayers by mistake and takes notice of this after completing the prayers, his prayers will be valid, and then he should offer Maghrib prayers after it.

– In normal circumstances, the end of the time for Isha prayers is midnight; and the night will be calculated from dawn (Subh-e-Sadiq).

– If a person in normal circumstances does not offer Maghrib or Isha prayers till after midnight, he should, as an obligatory precaution, offer the prayers in question before the dawn prayers, without making a Niyyat of Ada (i.e. in time) or Qadha (i.e. after the lapse of time).

– If a person cannot be certain about the Prime time for prayers due to a personal handicap like blindness or being in the prison cell, he should delay the prayer till such time when he feels sure that the time has set in. And as an obligatory precaution, he should act the same way when there are general hindrances like dust or clouds.

– If the time at the disposal of a person is sufficient for performing one Rak’at only he should offer the prayers with the Niyyat of Ada, i.e. offering the same in time. However, one should not delay offering prayers intentionally.

– It is Mustahab that a person should offer prayers at the Prime time prescribed for it, and great emphasis has been laid on it; alternatively, the nearer the prayers are to its Prime time, the better, except where there is good reason for delay, like, waiting to join the prayers in congregation. (Jamaat Prayer).

– If a person has a justifiable excuse for offering prayers with tayammum and he wishes to offer it at the Prime time knowing that his excuse will continue till the end of the prescribed time, or having no hope for redress, he can offer prayers in the early part of the time. But if he has a hope that the excuse will cease to exist, he should wait till his excuse is removed. In case his excuse is not removed, he would offer prayers in the last part of the time.

But by so doing, it is not necessary that he should wait so much that he may be able to perform only the obligatory acts of the prayers. In fact, if he has time for the Mustahab acts like Adhan, Iqamah and qunut as well, he can perform tayammum and offer prayers along with these Mustahab acts.

As for other excuses which do not justify tayammum, it is permissible for him to offer prayers at its Prime time, even if he has not lost hope about redress. However, if the excuse actually ceases to exist while he is praying, he must repeat the prayers.

– If a person does not know the rules about prayers, doubts occurring in it, or about the forgotten parts, and if he feels that such problems would probably arise in his Prayer, he should defer from its Prime time so as to learn the relevant rules. However, if he is hopeful that he can offer prayers correctly he may pray at its Prime time. And if no problem arose during the prayers, his prayers would be correct and valid.

But if a problem arose and the rules relating to it were not known to him, he would be allowed to act on one of the two probabilities and complete the prayers. And, after the prayers, he should enquire about the rule so that if his prayers had been void he would offer it again, and if it had been valid, he need not to repeat it.

– If there is ample time for prayers, and at the same time his creditor demands repayment of his loan from him, he should repay the loan first, if possible, and then offer prayers. Similarly, if there emerges another obligatory matter which demands immediate attention, like if a man sees that the Masjid has become Najis, he should make it clean first and then offer prayers. And in both the cases if he offers his prayers first he commits a sin but his prayer is in order.

The prayers which should be performed in sequence

– If a person starts Prayer with the niyyat of Zuhr prayers, and during the prayers he recollects that he has already offered Zuhr prayers, he is not allowed to change the niyyat to Asr prayers. He should abandon that Prayer, and start Asr Prayer. And the same rule applies to the Maghrib and Isha Prayer.

– If, while offering the Asr prayers, a man doubts whether he has offered the Zuhr prayers, he should complete his Prayer with the same niyyat of Asr, and then pray Zuhr. However, if the time is so short, that that the sun would set by the time he finishes the prayers, and there would be no time left even for one Rak’at, then it is not necessary to pray Zuhr Prayer as Qadha.

– If, while offering the Isha prayers, a man doubts whether he has offered Maghrib prayers, he should complete the Prayer with the same niyyat of Isha. But if the time is short, and he will not be able to perform even one Rak’at after completion of Isha, it is not necessary to pray Maghrib as Qadha.

– If while offering Isha prayers, a person doubts after reaching the Ruku of the 4th Rak’at, whether he has offered Maghrib prayers, he should complete the Isha Prayers. Thereafter, he should pray Maghrib, if the time for it is still available (i.e. if it is not Qadha).

– It is not permissible to change niyyat from Qadha to Ada (i.e. prayers which is offered within the prescribed time), nor from Mustahab to obligatory prayers.

– If a person has sufficient time at his disposal to offer prayers within the time, he can, while offering the prayers, change niyyat to Qadha prayers, provided that it is possible to do so. For example, if he is offering Zuhr prayers, he can change to Qadha of dawn prayers, only when he has not entered the Ruku of the third Rak’at.