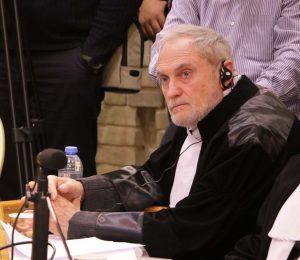 Dr. Corbuchi, who, after converting to Islam, took the name “Ahmad Kamal” for himself, he has frequent trips to Mashhad and has visited the pilgrimage of Imam Reza (a.s), saying: I do not know much about Imam Reza (a.s), but at the first time that I came here I felt this is the place which I need it…

Dr. Carlo Corbuchi is a juristic and lawyer and he has 6 books which 5 of them are about Mysticism and Islam.

This researcher is defender of Muslims rights which is working about 35 years in the most important courts in Italy as a lawyer and has defended Muslims living in Europe, often in cases where Muslims have been charged with various charges (especially at event of 11 September 2001).

A book to respond to distortion of the facts

“Islamic terrorism, deceit and distortion of the facts” is Carlo Corbuchi’s book which has been investigated the performance of the courts and the results of the votes given according to the geographical-political, historical and social situations. This book primarily provides realistic answers and truth-centered on the phenomenon of Islamic terrorism in general and events like September 11 in New York and events in Madrid, London and ….

It is explained in this book that how they so-called judicial scenes in condemnation direction of various groups of Muslims and the results and its consequence is to expel them from the scene of society, undermine the dignity of Muslims and finally, the full use of all advertising tools to disrupt the face of Islam and thus justifying the actions of great powers and the coalition of European governments and the Italian government in particular, is the conspiracy with the main designers.

He had 80 percent of the cases of Islamic terrorism in Italy and Europe. Since the age of 20, he has embraced Islam and adopted Shiite religion and has gone to Hajj seven times.

Sense of need for Mashhad

Dr. Corbuchi, who, after converting to Islam, took the name “Ahmad Kamal” for himself, he has frequent trips to Mashhad and has visited the pilgrimage of Imam Reza (a.s), saying: I do not know much about Imam Reza (a.s), but at the first time that I came here I felt this is the place which I need it… Human beings, in fact, feel this place as their own spiritual homeland. This city, this privacy is sacred to me.

He says about the cause of communicating with such spiritual spaces: holy shrine of the Eighth Imam of Shiites like all holy places, has a special blessing that can be communicated with. I am looking for spiritual balance on these journeys.

Dr. Corbuchi adds: I grew up in the Catholic religious’ family and getting into Islam could not be based on excitement, I searched and I followed it until I got it. Understanding was behind this interest. Forty years ago, due to my passion for mysticism and spirituality, my attention was drawn to Islam, therefore, my converting to Islam, wasn’t because of excitement.

From pilgrimages, I traveled through the truth

The Italian juristic about the depth of his perception and view of Islam and importance of pilgrimage to Ahlul Bayt (as) says: Because my view and my entry to Islam was a profound searching and mysticism, defining it as a narrative is a hard work. I got to the path of truth with the performances of Hajj and pilgrimages that I had near the Imams (a.s) and this is the most serious way of introducing Islam to those who have understood the need to recognize Islam.

The pilgrimage itself is a definition for understanding mysticism and this pilgrimage defines the spiritual and mystical mode of worship, when you are in front of Imam and communicate, somehow you have communicated with your deepest existential dimension and you realize a great spirituality.

He says about his inner transformation about Islam: I found more depth of spirituality in the Shiite school. My approach to Islam first came from Sufism and my mentally primary Islam was very different from real Islam. I believe that the relationship that Islam establishes is carried out through Ahlul Bayt (a.s) and in Sufism, they follow their own Sheikh.

He says about the greatness of the Islamic Revolution of Iran and the wise and liberator character of Imam Khomeini in the world: The Islamic revolution, through the spiritual insurrection of Imam Khomeini, found a great mystical and spirituality in the world, but later, with the involvement of arrogance and poisonous media propaganda against the revolution and Imam Khomeini, tried to undermine this spiritual space and other sedition after ISIS (داعش) presence in the region was to destroy the face of Islam and Muslims and this strategy is for those who seek for globalization plan and this is their plan, to eliminate Whatever prevents the idea of ​​pure materialism.

He says: The biggest thing that was going on in the direction of Islam was the familiarity with Imam Khomeini’s personality. I wish to know the great spirit of Imam Khomeini and the flag that he raised. I wish his thought in Iran to be known. The thought of Imam Khomeini must flow into individual and social political life.

He sees his greatest desire to realize the teachings of Islam and adds: Remember that our most important destination is the Hereafter, we have to live such a way that in the presence of God enter with hand full and knowledge.