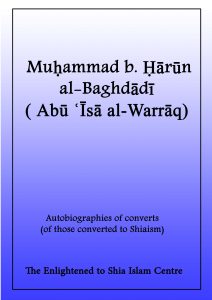 Muḥammad b. Ḥārūn al-Baghdādī (Arabic: محمد بن هارون البغدادی), better known as Abū ʿĪsā al-Warrāq (Arabic: ابوعیسی الوَرّاق) (d. 247/861-62 or 248/862-63), was a theologian in the 3rd/9th century. He was an Iranian resident of Baghdad, who worked there as a scribe and bookseller. He was among the Mu’tazilites who converted to Shiism, though there is disagreement as to his real religious affiliation. Al-Shaykh al-Mufid and al-Sharif al-Murtada considered him a genuine Shi’a and defended him and his works such as Kitab al-Imama and Kitab al-Saqifa, which were related to Shiite beliefs. However, in Sunni sources, he is mentioned as an atheist. His opinions and scholarly works were seriously taken into account by his contemporary scholars. He is also regarded as a serious opponent and critic of Mu’tazila. Ibn al-Rawandi was one of al-Warraq’s students who later opposed his teacher and considered him an apostate. Al-Najashi has mentioned a list of al-Warraq’s works, among which is al-Maqalat on sects and creeds.

Muhammad b. Harun al-Baghdadi, better known as Abu Isa al-Warraq was one of the theologians of the 3rd/9th century. He was an Iranian who resided in Baghdad and passed away in 247/861-62 or 248/862-63. The most important scholarly activity of al-Warraq was his confrontation with Mu’tazili thought. He was mainly a critic of the Mu’tazili doctrines on the Oneness of God. It was because of this, it is said, that the Mu’tazilites declared him a proponent of polytheism. His approaches and theological opinions were seriously taken into account by the scholars of his time. Ibn Nadim regarded him as an original theologian. Al-Warraq and others who left Mu’tazila were called “mukhlit” (mixer).

Al-Warraq’s religious affiliation is a matter of controversy. According to Mu’tazili accounts, he was first a Mu’tazili but left Mu’tazila afterward. Some Mu’tazili scholars believe that he pretended to have converted to Shiism and defended Shiite beliefs only in order to attack Islam. Ibn al-Nadim also counted him among people whose conversion to Islam was not genuine.

It is reported that he wrote a book on the refutation of dualistic cosmology to defend himself against the accusation of apostasy, but his effort seems to have been fruitless as Ibn al-Rawandi, his own student, continued to regard him as an apostate. However, since he wrote some books on imamate and in defense of Shiism, al-Shaykh al-Mufid and al-Sharif al-Murtada considered him a Shi’a.

At any rate, since none of al-Warraq’s works are available, it is difficult to ascertain his religious affiliation.

Al-Najashi counts al-Warraq as a theologian who wrote about different thoughts and ideas, and considers al-Maqalat his most important work. In this work and in his Ikhtilaf al-Shi’a, al-Warraq discusses the differences between different Shiite sects. Among his works are the following:

According to Zaryab Khui, none of al-Warraq’s works are extant today except the parts quoted in other works, especially those belonging to his opponents. In Muruj al-dhahab, which was compiled one century after al-Warraq, al-Mas’udi mentions al-Warraq and his works, which he describes as “good and multiple”, and among them, he counts al-Majalis and al-Maqalat. Kitab al-Diyanat, al-Hadath, and a number of works on the refutation of Christianity and Judaism have been mentioned among his works.