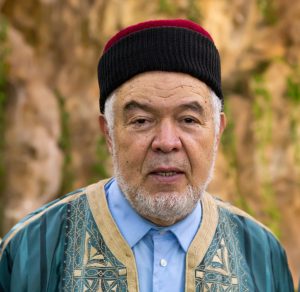 Al-Tijani was born in Tunisian Sunni Muslim family of Maliki creed. Previously, his family added “al-Tijani” to their name after adopting Tijaniyyah Sufi tariqa of Ahmad al-Tijani. He was eighteen years of age when the Les Scouts Tunisiens agreed to send him as one of six Tunisian representatives to the first conference for Islamic and Arab scouts which took place in Mecca. He used the opportunity to perform mandatory pilgrimage. He stayed twenty five days in Saudi Arabia, during which he met many prominent Wahhabi scholars, listened to their lectures and became heavily influenced by Wahhabism. Upon returning to Tunisia, al-Tijani started actively promoting and spreading Wahhabism during the religious classes and sermons that he gave, including in the Great Mosque of Kairouan.

He then traveled to Egypt’s al-Azhar. On the way back to Tunisia, Al-Tijani met a Shia Iraqi lecturer from the University of Baghdad named Mun’im. He came to Cairo to submit his Ph.D. thesis at al-Azhar University. Mun’im invited him to Iraq. Al-Samawi spent several weeks with Mun’im; visited Baghdad and Najaf, and met with several leading Shi’a scholars. These included: Abu al-Qasim al-Khoei, Muhammad Baqir al-Sadr and Muhammad Husayn Tabataba’i, who taught him about Shia Islam. After long debates with the Shia scholars, he became a Shia muslim, following the Jafari Madhab.

Al-Tijani’s books are banned in some countries, such as Saudi Arabia and Malaysia. He has written six books: