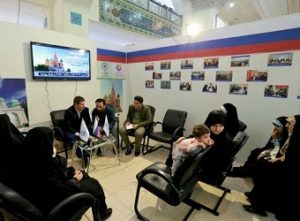 Russia is a big country with different cultures, but in the south of Russia, Muslims and Christians live together, which became the basis for my introduction to Islamic culture.

Simonov, who is currently a student of Al-Mustafa Al-Alamiya Islamic Center in Qom, said: In the original Russian culture, respect for parents and elders had a very high place, but after the collapse of the Soviet Union and the influence of Western culture, this issue is now somewhat weak and faint.

This Russian Reborn continued to consider respect for parents and elders as one of the common features of the Qur’an and authentic Russian culture and said: In the Muslim-populated regions of Russia, including Chechnya and Dagestan, the relationship between families is more intimate and somewhat similar to Iran, but in the Christian regions, especially in Siberia and St. Petersburg, the relationship between relatives is very weak.

Mikhail Simonov called children’s conflict with their parents and standing in front of them as one of the negative effects of the influence of Western culture on Russian society, especially after the collapse of the Soviet Union, and added: In the old Russian culture, respect for parents was very strong.

He said: In Russian society, there are sensitivities about women’s clothing among Muslims and even Christians who believe in Christianity, so that holding the 2018 World Cup in Russia had opponents and Muslims believed that the presence of foreign women with inappropriate clothing has a negative effect on society.

In the end, Simonov said: My parents are both Christians who now live separately, but my wife is a Ukrainian Reborn whom I met at the Bint Al Huda Islamic Center in Qom and we finally got married.

This Russian Reborn is 33 years old, who completed his education in the field of management at a Russian university, and after converting to Islam, he is now studying Islamic sciences in the Al-Mustafa Islamic Center of Qom.