Oljeitu was the son of Arghun’s third wife, the Christian Uruk Khatun. Oljeitu was baptised as a Christian and received the name Nikolya (Nicholas) after Pope Nicholas IV. During his youth he converted to Buddhism and later to Sunni Islam along with his brother Ghazan. He later converted to Shi’a Islam after coming into contact with Shi’a scholars, although another source indicates he converted to Islam through the persuasions of his wife. He changed his first name to the Islamic name Muhammad. Some of his relatives and companions gave him a nickname of Khutabanda. Rashid al-Din wrote that he adopted the name Oljeitu following Yuan emperor Oljeitu Temür enthroned in Dadu. But some Muslim source mentions that it rained when he was born, and delighted Mongols called him Mongolian name Öljeitu (Өлзийт), meaning auspicious.

After succeeding his brother, Öljeitu became influenced by Shi’a theologians Al-Hilli and Maitham Al Bahrani. In 1306, Oljeitu founded the city of Soltaniyeh, and upon Al-Hilli’s death, Oljeitu transferred his teacher’s remains from Baghdad to a domed shrine he built in Soltaniyeh. Later, alienated by the factional strife between the Hanafis and the Shafis, Oljeitu changed his sect to Shi’a Islam in 1310, believing it to be the true version of Islam. 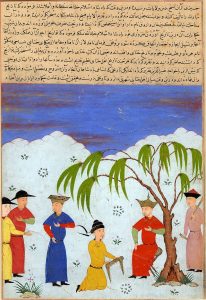 as featured in Compendium of Chronicles of Rashiduldin Hamadani,

kept at British Museum in London

He died in Soltaniyeh, near Zanjan, in 1316, having reigned for twelve years and nine months. Afterwards, Rashid al-Din Hamadani was accused of having caused his death by poisoning and was executed. Oljeitu was succeeded by his son Abu Sa’id. His magnificent tomb in Soltaniyeh, 300 km west of Tehran, remains the best known monument of Ilkhanid Persia.