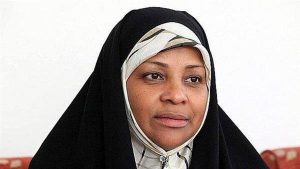 Marzieh Hashemi (Persian: مرضیه هاشمی‎; birthname Melanie Franklin, (born 21 December 1959) is an American-Iranian journalist and television presenter. She is a natural-born citizen of the United States and a naturalized citizen of the Islamic Republic of Iran. She is employed by the Iranian state run Press TV news agency and serves as the editor-in-chief of Mahjubah magazine.

On January 15, 2019, Hashemi was arrested by the FBI while boarding a St. Louis flight to visit her son in Denver. The cause for her arrest was initially unknown, but according to subsequent court documents she was being held as a material witness for a federal investigation. Following testimony before a federal grand jury in Washington D.C., Hashemi was released on 23 January 2019.

Hashemi was born in New Orleans, United States. She was born into a Christian African-American family. She was a student in the field of broadcasting in 1979, when the Iranian revolution happened, as a result of which she converted to Islam and began her career in Islamic newspapers and magazines in U.S.

Since 2008, she has lived in Iran, where she is now a TV presenter, journalist, voice-over artist, and documentarian and the host of Press TV, Iran’s English-language broadcasting network.

She has said the main reason for her conversion was the Iranian revolution and the character of Ayatollah Khomeini.

When I was a student in America I witnessed that the Iranian students are so active and I was so interested in political activities then, I used to ask them about their activities and purposes, why you protest? And they used to talk about the cruelty of the overset king [sic] and Imam Khomeini to me, and this was the first step of me becoming Muslim. I was looking for the truth and I wasn’t satisfied with my own religion, and I had no solution for the problem that the God has three parts of the Father, and the Son, and the holy Spirit, but [sic] still were one? I wasn’t convinced with answers when I asked from different people, when this issue happened to be in university, I started to study not only about Islam but about different religions, and simultaneously comparing them in theory and ideology, from Marx [sic] Weber up to now, and thanks God, after I became Muslim.

She changed her name to Marzieh Hashemi after conversion; Hashemi is her Muslim husband’s last name and she chose Marzieh, a title of Fatimah bint Muhammad (s.a.w.w), the daughter of an Islamic Prophet.