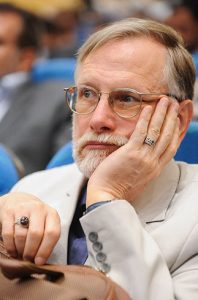 Gary Carl (Muhammad) Legenhausen (born 1953, New York City) is an American philosopher who teaches at the Imam Khomeini Education and Research Institute, which is directed by Mohammad Taghi Mesbah Yazdi.

He converted to Islam in 1983. He wrote a book entitled Islam and Religious Pluralism in which he advocates “non-reductive religious pluralism”. He has been an advocate of interfaith dialogue, and serves on the advisory board of the Society for Religious Studies in Qom. He holds a Ph.D. in philosophy from Rice University (1983).

He taught philosophy of religion, ethics and epistemology at the Islamic Iranian Academy of Philosophy from 1990 until 1994. Since 1996, he has been studying Islam and teaching Western philosophy and Christianity at the Imam Khomeini Education and Research Institute in Iran. He is also a founding member of the advisory board of the Shi`ite Studies Center in Qom, and serves on the scientific board of the Human Rights Center of Mofid University, Qom.

Brought up as a Catholic, he abandoned religion shortly after beginning his academic studies at the State University of New York at Albany. In 1979, he became acquainted with Islam through Muslim students at Texas Southern University, where he taught from 1979 to 1989.