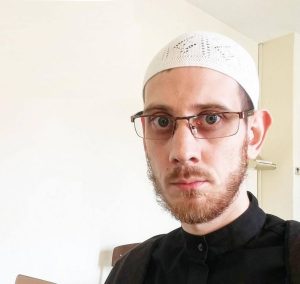 My real name is Greg Sowden. I converted to Islam from the Roman Catholic church on December 15, 2001 (Ramadan 29, 1422). I have chosen the Muslim name Ali Husayn al-Mahdi. Im 19 years old. My birthday is July 26, 1985. I would like to become a high school history teacher. I would also like to study Islam one day at the Hawzah in Qom. I want to travel as well.

I bear witness that there is no God worthy of worship but Allah, the Most Gracious, the Most Merciful and that Mohammad is His final Prophet and Messenger and Ali ibn Abu Talib is his rightful successor until the Day of Judgement!

I am a convert to Islam! Alhamdolellah!

I will tell you about my life….

My family is Roman Catholic. Before I became Muslim, I went to church every week and never questioned my beliefs. I was a devout Catholic and whenever I heard someone say something wrong about Catholicism, I would try to prove them wrong. My uncle is Protestant and he and I would often talk about which religion was right. My mum says that I am not the “right religion” anymore. She keeps telling me I was happy with my religion before, so, she wonders, why did I change? I became a Muslim because I found out about Islam and became very interested. I became convinced that al-Islam is the true faith sent down by God. By learning more and more everyday about my faith I have “fell in love” with Islam.

My friend from Kuwait, who I met in 2000 taught me about Islam. I knew very little about Islam before he began to teach me, so I guess he “opened my eyes” to Islam: the truth!

I never thought about converting to Islam because I thought I was happy being Catholic. But then I started taking a course at high school called “World Religions” and in my textbook it had some information about Jesus (PBUH) in Islam. So, I went home and looked this topic up on the Internet. The information I found sounded convinced me that what Islam said was the truth. The arguments were good. And there was proof of it in the Bible! I found information about the miracles of Islam and those in the Quran. I read a few more articles about Islam and they “enlightened” me.

So, I emailed my Kuwaiti friend and told him about my findings. I told him that “maybe I should convert!” I didn’t plan on doing it soon. I thought I would convert after I turned 18 because I couldn’t get to a masjid. I told my Kuwaiti friend this and he said I could say the Shahadah to him. So, on December 15, 2001 (Ramadan 29, 1422) I said the Shahadah to him over MSN Messenger (I have said it to some other Muslim friends since then as well). By saying those wonderful words, I became a Muslim! Alhamdolellah! All Praise be to Allah!

My other friend sent me a Quran in the mail in January 2002, and it is the most beautiful book I have ever read. I have to keep it hidden because my brother wants to burn it!

I became Muslim because the religion makes so much more sense than Christianity. The Trinity makes absolutely no sense. 1+1+1 does not equal 1! Nabi Mohammad (PBUH) is mentioned in the Bible, and the arguments refuting Christian teachings were so true. The Quran has so many miracles in it, and it obviously was written by Allah!

My family is against my conversion. But they do not know what Islam is. I have tried to teach them but they do not care and criticize me! Before I left for university my mum made me go to church every week. I wanted to go to a Masjid, but I lived in in a small town where there is no masjid near me and I couldn’t drive to the city to go to one. Alhamdolellah, I can now go to a masjid.

On Wednesday, September 10, 2003, I went to the masjid for the first time, Alhamdolellah! I went with Brother Hasnein (who I know from Shia Chat). He and I are going to university in Waterloo, Ontario. He goes to University of Waterloo, and I go to Wilfrid Laurier University; which are about a 15-minute walk apart. We went for the Birthday of Imam Ali (AS). We took the bus there and we kind of got lost walking down the street because the masjid is in the middle of a residential area. Then we saw a woman in hijab going into the masjid and so we went in. We got there late but we caught most of the Khutbah, which was in English. I didn’t understand some of the Arabic used at the masjid but I caught a few phrases. After that, we did Maghrib and Isha prayers. That was the first time I have prayed with other Muslims, and it was a wonderful experience. Alhamdolellah! After that Hasnein introduced me to a few people, and we talked for a few minutes. And we had ice cream and chocolate bars. Then it was time to back to university. Sheikh Saleem drove Hasnein and I home and showed us the Halal/Muslim places in town. Since then I have gone to every masjid event that I can go. I thank Allah (SWT) that my masjid has accepted me as a member of their community, and has done so much to help me.

Hopefully my mum does not find out about this because I would be in deep trouble. I talked to her on the phone and she said that she phoned earlier and I wasn’t in. I told her that I went out with some friends (not a lie, Alhamdolellah. because I did go out with friends). She didn’t believe me because I am a “stay at home” type of person. Alhamdolellah!

Since I have become a Muslim, I have made many good Muslim friends. They are there for me when I have questions and when I need prayers.

I am proud that I have found the true path – Shia Islam. I know that following the AhlulBayt (AS) of the Prophet Mohammad (PBUH) is what Allah wants all of us to do.