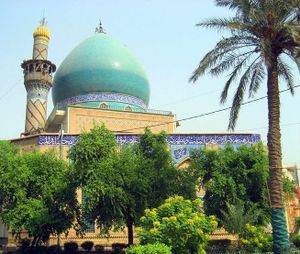 Companion of: Imam al-Hasan al-‘Askari (a), Imam al-Mahdi (a)

It is reported that he wrote some books in jurisprudence that Kitab al-ashriba is among them.

His name was Muhammad, son of ‘Uthman b. Sa’id al-‘Amri, the first deputy of Imam al-Mahdi (a). His teknonym was Abu Ja’far and no other teknonyms is mentioned for him in hadith and rijal references.

Also, in al-Ghayba, al-Shaykh al-Tusi narrated from Imam al-Hasan al-‘Askari, “al-‘Amri (‘Uthman b. Sa’id) and his son (Muhammad b. ‘Uthman) are both trustworthy and reliable. Whatever they bring to you is from me, and whatever they tell you is also from me; so, listen to them and obey what they say for they are reliable and trustworthy.”

After his father passed away, Abu Ja’far received a letter of condolence from Imam al-Mahdi (a). In that letter, he (a) expressed his sympathy for the death of Abu Ja’far’s father and mentioned that he was appointed to this responsibility.

However, some Twlever Shia agents had doubt about his appointment. Therefore, Abu Ja’far faced some difficulties.

Some of those who doubted his deputyship were:

In his al-Ghayba, al-Shaykh al-Tusi mentioned a hadith suggesting that Muhammad b. ‘Uthman had written some works.

Ibn Nuh al-Sirafi reported from Abu Nasr, a descendant of Muhammad b. ‘Uthman, that Muhammad b. ‘Uthman had some books in jurisprudence in which he compiled hadiths he had heard from Imam al-Hasan al-‘Askari (a), Imam al-Mahdi (a) and his father ‘Uthman b. Sa’id who had also narrated from Imam al-Hadi (a) and Imam al-‘Askari (a). Al-Sirafi mentioned that one of those book was Kitab al-Ashriba and then again quotes from Umm Kulthum, daughter of Abu Ja’far, that this book was given, upon the will of Muhammad b. ‘Uthman, to Husayn b. Ruh (third deputy) and was in his hand. Abu Nasr, himself adds that after Husayn b. Ruh, this book has probably reached to Abu l-Hasan Samuri (fourth deputy).

Despite the problems of Abu Ja’far due to the existence of false deputies such as Ibn Hilal, al-Bilali and Ibn Nadir, he continued the hidden activities of the organization of agents and expanded its roles among Twelver Shia. At the same time, he followed up the works of the first representative and tried to prove the existence of the hidden Imam (a) for trusted ones among Twelver Shia.

He disseminated this opinion among Twelver Shia that occultation of Imam (a) has been done by the order of God and hadiths of previous Imams (a) supported it and that he – Abu Ja’far – was the true representative of the hidden Imam (a). Moreover, he tried to follow up the responsibilities of the first representative without being harassed by Abbasid government. Therefore, he reinforced the belief made among Abbasids supported by the first representative that Imam al-‘Askari (a) passed away without a successor. He was hopeful that this way, the government would be convinced that there would be no uprisings, because Twelver Shia had no twelfth Imam to gather around him and be guided and thus they would give up any measure against Shi’a.

He added that he had seen Imam (a) in Ka’ba while he (a) had grasped the cloth of the Ka’ba and was reciting this supplication, “O God, Take my revenge from my enemies.”

Although Abu Ja’far proved the existence of the Twelfth Imam (a) for al-Himayri, he warned them not to insist on discovering his name, since government officials were convinced that Imam al-‘Askari (a) had passed away without a successor;[18] and if they found the name and place of Imam (a), they would search for him and the life of him and his deputies would be endangered. Other reports suggest that the second representative of Imam (a) gave the same order to other agents.

Following the occurrence of Zanj uprising (255–270/766–883), the situation for Twelver Shia became difficult. The lineage of the leader of this uprising, Ali b. Muhammad reached Zayd b. Ali, brother of Imam al-Baqir (a). Therefore, a great number of Alids joined him and participated in his uprising since 257/871.

Although Imam al-‘Askari (a) clearly said that the leader of Zanj was not from the Ahl al-Bayt (a), government officials regarded this uprising affiliated with Alids. According to al-Tabari, suppression of Zanj uprising in 270/883 was done with the propaganda of the government against Alids.

Another factor which damaged the relations between Imamiyya and Abbasids was discovering underground activities of the two Isma’ilite factions, the original Isma’ilis and Qaramata.

According to some reports, Muhammad b. ‘Uthman foretold the time of his death two months before his death. He passed away at the end of Jumadi I, 305 AH (November 17, 917 CE).

It is famous among the scholars of rijal and hadith that the period of Muhammad b. ‘Uthman’s deputy-ship was about fifty years. However, it seems incorrect, because his demise was in 305/917, forty five years after the martyrdom of Imam al-Hasan al-‘Askari (a), and the first deputy, ‘Uthman b. Sa’id, was a deputy for five years and thus the period of his deputy-ship must have been forty years, not fifty years.