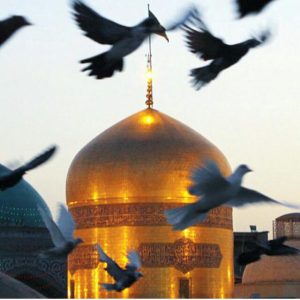 Based on a related report, visiting Imam Reza Holy Shrine (AS), an Ethiopian lady converted to Islam and became a Shia Muslim.

Getting familiar with principles of Islam, accepting the oneness of God, prophecy of Prophet Muhammad (PBUH), as well as confessing to the Velayat of Ali (AS), Almaz Mardas converted to Islam and became a Shia Muslim.

Almaz Mardas, the 20-year old girl from Ethiopia, who is residing in Lebanon for six years, converted to Islam in her first attendance in the Razavi Holy Shrine and chose the Shi’ite Islam.

The Muslim convert recounted her motivation from embracing Islam as presence of the rational principles in Islam and said, “Though I am living among Muslims for only six years, I have become extremely fond of this heavenly religion.”

“Many people guided me through this way and tried to clarify the principles of Islam to me with their behaviors and ethics and since I was already familiar with the Islamic traditions, I decided to adopt Islam as my religion and I need further studying and research for keeping on the way”, she continued.

As a factor of her attraction to Islam, she pointed to the religious ceremonies especially the mourning ceremony for Imam Hussein (A.S.) and asserted, “The Infallible Imams (A.S.) played a significant role in clarifying the Islam and they are actually the right successors of the respected prophet of Islam (S.A.W.) for Muslims.”

“I assume that Islam and Shi’ite have revealed the facts of the religion thoroughly and perfectly for the mankind and contain the answers to all questions of human beings”, she continued.

“I am really glad for choosing Islam as my religion since it has opened a new window to the universe and has changed my view to the reality, existence, and the life”, the African lady remarked.

“Islam and Shi’ite in particular has made me closer to God, giving a better sense of tranquility; I think the Islamic look to woman is a respectful and admiring look”, she said.

“Imam Reza (A.S.) is an offspring of the prophet (S.A.W.) whose ethical features and piety has attracted me”, Mardas described her feeling from being in the Razavi Holy Shrine.

With tearful eyes, the Muslim convert expressed her feeling as indescribable and said, “I feel happy that Imam Reza (A.S.) has kindly given shelter to me and I hope I can be a real follower of his holiness by my acts and behavior.”

It is notable that in this ceremony that was held with contribution of Management of Non-Iranian Pilgrims of Astan Quds Razavi, the Muslim lady was dedicated some valuable gifts including an Arabic Qur’an, the book ‘The 250-year Old Human Being’, a selection of Imam Reza’s (A.S.) biography, biography of Hazrat Fatemeh Zahra (A.S.), a prayer rug, a prayer Chador (veiling clothes), and a blessed grave stone.