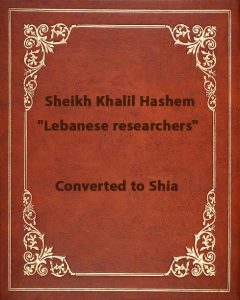 I was from a neighborhood in Lebanon where most people are Sunni and not only do not know about the Shiite religion, but they are also ignorant of their Sunni religion.

Arguing with them is useless and causes slander to leave the religion. Somewhere I came across a man who had become a Shiite and asked him for a reason, he said: First, I heard the case of the ditch (جنگ خندق) and Imam Ali’s struggle with Amr ibn Abduwad and the hadith of the Messenger of God about Ali (a.s), which said: All faith and all disbelief stand against each other and then Defeat of Amr ibn Abduwad… Upon hearing this, I found a special feeling of love for Imam Ali (as). Finally, in order to clarify the truth, I started discussing religions, So I chose two schools and a few teachers, a group of Sunnis and a group of Shiites. I passed the words of each to the other. The focus of the discussions was the hadith of Ghadir and the guardianship of Ali (as), the special courage of Imam Ali, the sleeping of the Imam instead of the Messenger of God and sacrificing his life for the Prophet, the verse of guardianship and the obligation of Ali’s caliphate, the verse of purification etc.

The result was that all the doubts were answered by the Shiite scholars, and in many references to the Sunni scholars, after a long discussion, they also acknowledged the legitimacy of Imam Ali and the Ahl al-Bayt a.s.