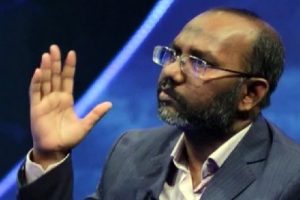 I am Subash Chandra 46 years old from India-Uttar Pradesh (UP). The population of our state is about 170 million people, more than twice population of Iran. People are busy with farming, machines and computer parts, but cultivation rice and wheat are the most. My father is also a farmer. I was also a farmer. We are an eight-member family.

How old were you in India and what was your religion?

I think up to fifteen years old I was in India. My religion was Hindu “idolatrous”. Of course there are also different sects among Hindus that are more regional.

What are they do for their God?

Each region has an idol which people make food on special dates and special occasions, they put it in front of the idol and stay about half an hour, then bring food to the house and divide it or washing the idol and take the water as a blessing or the ladies put their Indian dots (خال هندی) on idols to show that they have gone to pilgrimage.

Mr. Chandra Why do you know the food of Muslims as unclean(نجس)?

Nobody has said anything to me, but I thought Muslims were dirty in their homes. Hindus do not go with the shoes in the kitchen but Muslims enter with slippers and raise their chickens at home. These are the uncleanity criterion among the Hindus. Although the reality was quite the opposite.

How did you get to know Islam?

We live in the region where Hindu and idolatry is everywhere, but close to our house was a Muslim population, seventy to eighty houses within one kilometer of ours, all of which were Shiites. They had a lot of land, we worked with them on one farmland because of our same duty. I was going there to help my grandfather and I became friend with the children of Shiites. Before that I was very fanatical, if the Muslims were touching something, we would have known it as unclean and we were not using their food, but after the friendship with the Shiites, this feeling gradually diminished, for example I was eating mango with them. And my fanaticism completely disappeared as far as I sometimes going to their home and eating food with them. They also did not react.

In the middle of that Shiite area, there was a Hussainiyah (حسینیه) which there was majlis-e- mourning (مجلس روضه) every Thursday. I also was going there for the sake of eating sweets after the mourning!

Please continue the story and attend the mourning.

Yes, I just was going there to eat sweets that distribute at the end of the program. It took three to four years. When they said that Subhan Allah and Masha Allah, I was understanding that the mourning begins. When they were starting to cry, I was realizing that the mourning is finishing, I was saying to myself, Muslims who are crying like this, will surely one of them has dead. Beside our home, there was a Shia person living. A woman who is still alive, one day I told her why are you crying? She asked me: Are you a supporter of Imam Hussein (a.s) or Yazid? I did not know any of them because they talked in Urdu in the mourning. But I understand by the way of naming them, Imam Hussein (a.s) is a good person and Yazid is not good. I said Imam Hussein (a.s)! They began to explain the periphery, Mecca, Medina, Karbala, the Prophet (s.a.w.w), Imam Ali (a.s), Imam Hussein (a.s) and ….

Do you remember anything from that speeches?

Yes, they were speech so much about Imam Hussein (a.s) and Karbala; specially about the story that Imam Hussein (a.s) gave water to the Hor’s corps. They defined what they remembered and then repeated again, I said to myself I know these things, so I should to go for someone else to know more. Two kilometers away from the Muslim community, there was another great Hussainiyah which had a lots of lands, the trustee was also a Hindu who is still alive. An idolater who believed in Imam Hussein so much (a.s).

I want to say something; may be you don’t believe it. In the time of destruction of Babri mosque, some Hindus wanted to destruct the Hussainiyah and take possession of the mosque. This news came to the ears of the idolater. He was alone, because the Muslims were two kilometers away from him, since he was rich and influential, he prepared a number of weapons and putted each of his family guarded a portion of Hussainiyah. He had told them, as long as we are alive, no one has the right to approach Hussainiyah, they can touch Hussainiyah when all of us are gone and dead. When the Hindus heard that they were prepared to do something for Imam Hussein (a.s), they were afraid and ran away.

Every Thursday, in the place that we call it as “Nauchandi” there is a program of mourning, I was attending there too, although I did not know the prayer, but I was shaking my lips and raising my hands. Behind me was a teacher sitting, after mourning he told me: you played well! I also said to him, if I don’t act like this, they will understand that I am Hindu and get me out. He (which is retired now) began talking about the Imams (a.s). Sometimes they also read Quran and Nahj al-Balaghah, my thinking changed by 180 degrees, what I was hearing was something and what I was thinking was something else and what he said was completely different from the previous!

Do not miss your parents?

Yes, I miss them. My parents are very good people. It’s true that they are Hindu and idolater, but they, especially my father, have a special belief on Imam Hussein (a.s). When I was running out of the house, they were looking after me for one month, so that my dad was ill and the doctor was useless, eventually he goes to Hussainiyah and says that I want my son from Imam Hussein (a.s)! My father heals. He buys an oil lamp and endow it for Hussainiyah and says it is just for mourning of Imam Hussain (a.s). The oil lamp is still there. Once again I remember when I was a kid and I was going to the mourning, in a place where on the occasion of Ashura, was making the sample of Karbala’s tents (خیمه), my father told me, where are you going? I answered: Karbala! He said, you want to go by bicycle to the mourning of Imam Hussain (a.s)”!? Take side the bicycle and go by walking, by afraid of my father, left the bicycle side and went by walking. My family respect so much to Ahlul Bait (a.s), specially Imam Hussain (a.s). My sadness is that I could not invite them to Islam and embark them on the ship of Ahlul-Bait (a.s). Of course, my younger brother has been Muslim and he has visited Iran and is now in Kuwait.