Interview of a Revert to Islam, “AdbulMahdi (Markus) 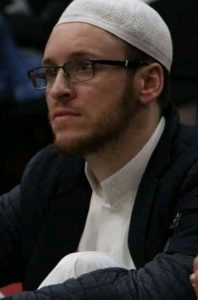 My family is half Croatian so I think a bit more than it is regular in Germany, but there weren’t many visits in the church

Let’s start from your life before Islam brother, how was life by then?

I think it was normal. It did much sport, I wasn’t this much into party or something like that in total. I always liked to learn as much as possible about things that interested me

I was raised Christian. But I wasn’t very into it because things like the trinity didn’t make sense for me

So, didn’t Christianity have any important part in your life or your family?

My family is half Croatian so I think a bit more than it is regular in Germany, but there weren’t many visits in the church

Aha,so not much, just like many other people living in modern societies

Well I always believed in God, but not quite in Christian prospective

Tell us about your first encounter with Islam, I think the monotheism in Islam has more attraction than in Christianity

There were many encounters, I visited a mosque in school and I studied a semester in Indonesia but in the more hinduistic part of Indonesia, but there I was living a mosque and heard the sound of Adhan, I was always interested in discipline Muslims go through the holy month of Ramadan

The most impactful encounter was while moving to my current city to do my master degree, because I had a much more Islamic environment

Well brother, at last why did you choose to change your beliefs and religion at all?

There were many encounters here. For example, I often go for a run in the city and there a mosque is 9n my direction. So, one time I encountered a prayer for someone who died. It was interesting. During the beginning of my master degree I started to read the holy koran and I started to recognize points which I believed in before getting to learn about Islam, like Sura al Iklhaas. During this time and because of my surrounding I learned more about Islam and I got to know about the Shia. And I read more

Sometime later there was another encounter in the city, where I gave money to an older Arab man, who asked for money in the street. I when I gave him some money, he said a prayer on Arabic for me and inside of me it moved something. During this time, I developed a type of bond to Islam. Another encounter was, when I visited the prayer room of my university and participated in the maghrib prayer. After the prayer I felt very energized

So, you prayed before you convert, also you knew about Shiah.

Well I think it was the same time. The conversion and starting to pray. Well I knew that there are Muslims who follow the sunni schools and who follow the Jafari school. But I didn’t really know the differences before. Then one of the first books I read after the Holy koran was Kitab Sulaym and it had a high impact on my thinking. While reading more I noticed that the Ahlul Bayt, alayhim al salam, and the proofs of the Imamate of Imam Ali, alayhi al salam, is also stated in sunni sources.

So, for me it became more and more clear that the Shia are on the right path. Than I started to visit a Shia center in my city and the first time participated at a majlis for Fatima Zahra salam Allah alayha

That’s great, Allah has chosen you like another Muslim reverts

You know brother we. Have many Shiah and ahle sunnah brothers and sisters in this community

But I search mostly for Shiah ones, they must had more researchs on history of Islam

Okay, my last question brother, what do you think about the superiority of Shiah belief over other religions and beliefs?

Well we follow the Ahlul Bayt, alayhim al salam, who are our path of guidance, because the Aimmah are a sort of living Koran. So if we stick to the Koran and the Ahlul Bayt, alayhim al salam, we have the true path,like stated at the assembly of Ghadir. There the superiority is that we have a proof of the genuine Sunnah of the Holy Prophet, saw. But that doesn’t mean that we shouldn’t tolerate the believes of others

MashaAllah brother you’ve chosen the right path anyway we shouldn’t be like haters for our ahle sunnah brothers and sisters, we should debate in the respective and right path, this way we can make them aware about history

Yes, I know khutbas in sunni mosque don’t talk much about history

Yes exactly, that’s why we make friendly debates with them, but wahhabies are astray and wrong sect, their actions are exactly opposite of prophet (s)

I know. I sometimes pray in a Turkish mosque in the city, when I’m not at home. The Shia center is just open for majlis or in the month of Ramadan. They are always friendly to me. But with the Wahabi sect it’s something different

Yes, brother may Allah bless you, thanks for your time and see you in Mahdi’s army